Your browser does not support the Unity Web Player. Want to save the game for later? Add it to a collection.

20160117 : Screendom is one year old! Woohoo! Even if it only gots around 1 view per month, I consider it as my best game so far. So, I uploaded an offline version for download, because a guy asked for it, but it took 6 month to see his post.

20150831 : ok, I've discovered a bug in the invasion by sea which allowed 1 guy to beat 30 guy, so I've corrected, and also rebalanced invasion probability to more succesfull and tamed a bit the aggressivity of the AI players. that's all folks

20150417 : final update and release, as a new ludum dare will probably dive me away on new stuff. So, here, 3 maps with on ressources, and building. UI global improvement regarding long block to display. A window inform you who you are playing, very useful in multiplayer. It's also possible to change the name of the kingdoms, and to reset default building and route while keeping ressources.

20150204 : Big changes, now the turn are executed "simultaneously" to not give an advantage in multiplayer. However, this means a phase part in the turn, as the end of turn can implies to answer to some requests. Also, it is now possible to set freely the quantity for action like invasion or offer money.

20150122 : Corrected a bug about invasion in latest patch which made invasion/pillage with 0 troop always succesfull. Corrected some text issue.

20150120 : A bit of infobox never hurted anyone, so you can now see a bit more detail about what an action do.

20150116 : Here is the diplomacy tutorial, and the ask close all route is now functionnal with the AI too!

20150109 : now, tutorial is divided into two parts, economics and military. A Diplomacy tutorial will come later.

20150105 : now you can choose your kingdom, and also invite some pals to the party (but some issue displaying previous turn action)

This game was initially made for LD31. The idea was to offer a diplomatic game with a short play. It happens that the compo version was unplayable because of lack of UI. But the people which played with the oral instruction enjoyed it, so I decided to spend some time on an UI, and more people started to enjoy it. I keep working on it for around one month, and then I moved up on other things, sometimes making updates.

I wanted to do, but I never took the time :

- a LAN or even online multiplayer

- some voice effect based on the kingdom played (ex : italy in italian)

- a tool to upload maps based on .svg files and split the region according to a txt file, or even automatically.

- icons for the building and ressources

- a "mission" mode which ask the player to do things (do an alliance with X, take control of the territory, earn this ressource, ...)

- more diplomatics action (incite to do war, sell/buy territory, ...), and to make them used by the AI too.

Anyway the game turned to be something I like.

Please notice that even if it is inspired by historical map, lot of it is completely random and/or false, for instance, I don't think that Wales was ever a renowned salt producer.

Also, if the Asia map seems not well cut, it's because initially it was planned for a bigger one, but there were too many AI, and as AI cycle is quite long, it was not possible to enjoy it.

This game is currently unavailable 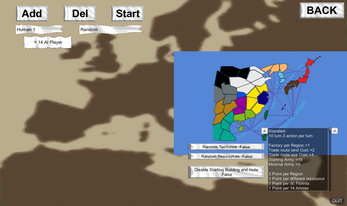